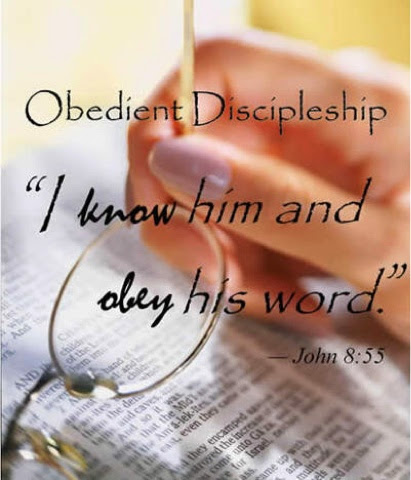 The other day a well mean friend had addressed a concern that she had with an mutual acquaintance.  I told her that The Lord, had spoken to me, to leave the situation alone. She than proceeded to urge me to pray about the matter, followed by her concerns and worries.
Knowing that I have heard clearly from God, I left that situation alone.
Note these verses..
1 King 13:
18 He said to him, “I too am a prophet as you are, and an angel spoke to me by the word of the Lord, saying, ‘Bring him back with you to your house, that he may eat bread and drink water.’” (He was lying to him.)
19 So he went back with him, and ate bread in his house, and drank water.
20 Now it happened, as they sat at the table, that the word of the Lord came to the prophet who had brought him back; 21 and he cried out to the man of God who came from Judah, saying, “Thus says the Lord: ‘Because you have disobeyed the word of the Lord, and have not kept the commandment which the Lord your God commanded you, 22 but you came back, ate bread, and drank water in the place of which the Lord said to you, “Eat no bread and drink no water,” your corpse shall not come to the tomb of your fathers.’”
23 So it was, after he had eaten bread and after he had drunk, that he saddled the donkey for him, the prophet whom he had brought back. 24 When he was gone, a lion met him on the road and killed him.
The prophet made a simple mistake, but one with major consequences! The prophet’s disobedience to God, cost him, his life !
When God speaks, listen! Don’t allow any to persuade you to be disobedient !
Heavenly Father, I come to You in the name of Jesus! Lord, Your word tells me in Proverbs 3:6 “In all your ways acknowledge Him, And He shall direct your paths.”
Lord, thank You for directing my path! Lord, may I be obedient to You in all that I say, and do!
For Your word declares in John 10:4-5… ” And when he brings out his own sheep, he goes before them; and the sheep follow him, for they know his voice. Yet they will by no means follow a stranger, but will flee from him, for they do not know the voice of strangers.”
I will follow Christ all the days of my life! In Jesus name I pray, Amen.
Have a wonderful Monday! Love Sis Rashida:)

View all posts by Rashida